Prepare for Blockchain or Prepare to Miss Out

Blockchain is a buzzword you see everywhere, but it seems to be surrounded in mystery. Cryptocurrencies like Bitcoin seem to be the domain of millennials and Silicon Valley gurus, but in reality, they have vast applications for the accounting industry and the world at large.

A basic definition of blockchain is that it’s a digital ledger that has a distributed database. In other words, it’s just like a standard accounting ledger, except everyone has a copy.

To extend the metaphor, think about how one would maintain a distributed ledger yet still be able to write in it. It would have to be really challenging to write new entries, but incredibly rewarding when it’s accomplished. It’s akin to a ledger in which entries are only valid if you write them with a really big pen that requires several people to lift it.

No one can ever erase any transactions, and there is no central administrator. Instead, users effectively vote on transactions in order to validate them, so there’s no need for a third-party to process and store payments. This transparency reduces needs for reconciliations and dispute management, and provides better certainty regarding rights and obligations.

Blockchain technology was originally applied to the first cryptocurrency, Bitcoin. Currently, it is mainly used to verify transactions within digital currencies, but there are applications that go far beyond the world of finance, extending to insurance, voting, and much more. However, for our purposes, it makes sense to focus on the monetary impact of this technology, which has been gaining steam since it first appeared in 2009.

Cryptocurrency, meanwhile, is a digital currency that uses cryptography as security, making it very difficult to counterfeit. Just like blockchain, it isn’t issued by any central administrator, making it a true international currency.

This infographic from PwC offers a helpful explainer of the whole blockchain ecosystem. 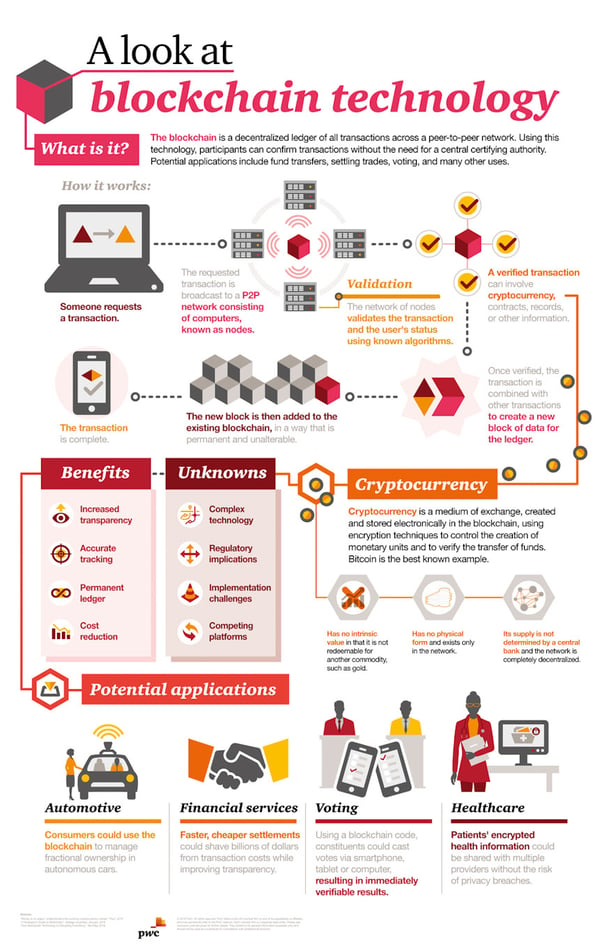 If you’ve been reading the news over the past few years, you’ve definitely noticed mentions of Bitcoin’s soaring price (and potential bubble), new cryptocurrencies, and other applications of blockchain. This technology, while still very new and unexplored, is clearly proliferating.

The price of a single bitcoin has gone from about $90 (USD) five years ago to more than $6,000 today. In January of 2018, it grew to over $17,000. It’s obviously a volatile market, but it’s rapidly expanding. Companies as diverse as Subway, Microsoft, E&Y, and even local nail salons now accept Bitcoin as payment.

Blockchain investments on the whole, meanwhile, are growing at a steadier rate. The following chart from Accounting Today shows just how much blockchain is blossoming. 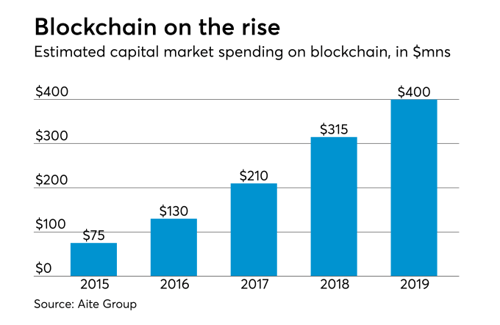 Naturally, a whole new category of currencies and method for creating and tracking them is a massive change. For accountants and other finance professionals, though, there’s little reason to be worried.

Certain other new technologies like artificial intelligence and automation are exciting opportunities for revenue growth yet threaten to reduce employment in certain areas. While blockchain could eventually displace bookkeepers and auditors, in the next decade or so it promises only profit—if you prepare yourself, that is.

As accounting professionals are experts in record keeping, regulations, and business advice, you have the opportunity to lead the blockchain transformation. We are still very much in the learning and experimentation phase: the Big Four are testing out blockchain programs, startups related to the technology keep popping up, and universities are starting to offer courses on it. The world’s financial systems need to adopt regulations and standards before blockchain becomes the norm.

In this environment, it’s crucial to educate yourself so you can offer professional guidance. Having knowledge of blockchain will set you apart in a field that’s already clamoring for this specialization. Moreover, by relieving yourself of various time-consuming aspects of auditing and reconciliations, you’ll be able to focus on more value-added services like advisory work.

By 2025, 10% of global GDP will be stored on blockchain technology. If you want to get in on the action, there’s no better time to start learning.

All-in-One Platforms vs Point Solution Software: Which One is Better?